Good morning, guys and dolls. So I made this huge, bumbling mistake and forgot to actually set the following interview as a real post for yesterday. It has been sitting in my drafts folder, waiting patiently… then I realized what I’d done and I feel so awful. [Pause to hang head in shame.]

Though I’m horribly late, please welcome Ronnell D. Porter to talk about himself and his writing. 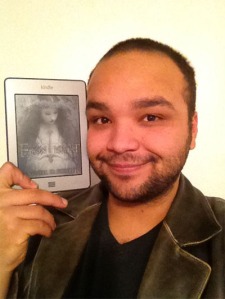 SK: Tell us about your most recent work and where we can get it:

RDP: My most recent work is a sequel to Dagger Heart called Ebon Heart, and it can be found on Amazon, Barnes & Noble, iTunes, and Smashwords. It begins exactly one year after the ending of the previous book, and deals with Erica trying to figure out her new role in society. After being a pariah her entire life, suddenly she’s praised as a hero and is the center of attention. I imagine that would be a very daunting experience, but something she’ll have to get used to.

SK: Your inspiration – is it from your imagination or from personal experience?

RDP: The imagination. I live vicariously through my stories. I think if I lived a more exciting life I wouldn’t be a writer.

SK: If given the opportunity to meet one of your characters in real life, which would it be and why?

RDP: I would want to meet Lucius Knight. He has lived long enough to understand how politics work in this world, and I would love to chip some wisdom off of that brain of his. I would also enjoy his company more than I probably would any other character, though there are a few other characters who come as a close second. But the main attraction is that Lucius doesn’t judge, he understands human weakness, and I would be very interested in knowing how he feels about meeting his creator face-to-face.

SK: What comes first, the plot, the characters, or the setting?

RDP: I would say the plot and setting usually come hand-in-hand: I couldn’t really decide on Vikings without having to place them in Scandinavia. But usually the plot.

SK: When you write, is it with or without visual/audio stimulation (tv, music, etc.)?

RDP: I always write to music. When I first started out, I couldn’t listen to any music that contained lyrics – I found them too distracting. Now that’s not the case, and most of the songs on my playlists involve lyrics of some sort. I also make a special playlist for each novel since they tend to set the mood and help me focus quicker than I would without its influence.

SK: Who is in control when you write, you or your characters?

RDP: Most certainly myself. I tend to focus to the point that I know my characters as though they were real human beings, so I can speak for them very easily and stay true to their personality. But it’s still me.

SK: What inspires you to write?

SK: Think fast: give me the silliest plot line you can think up!

[SK: I have to say… I almost fell out of my chair laughing at this one! I think Mr. Porter certainly needs to write this one, doesn’t he?]

SK: Golden Girls Fans: If you had to compare yourself to one of the Girls, which one would you be most like and why?

RDP: I would be a Dorothy – a tall lumbering cloud of cynicism that drenches my companions in the soggy rain of sarcasm wherever we go. But they’ll still thank me for being a friend.

RDP: Vampires. There’s a promise of sophistication and sensuality that comes hand-in-hand with the creatures of shadow. Werewolves would come second, but nothing I would prefer to be or see outside of film. And zombies, well… They were interesting four decades ago; I really don’t understand the appeal today, but to each their own.

SK: If the apocalypse happened tomorrow, how would you react?

RDP: Indifferently. To say that there would be regrets would be to assume that I would be a special abnormality and survive the apocalypse. But since I’m assuming that an apocalypse is an end-all type of affair I suppose I really wouldn’t care once it happened since I would be dead.

SK: Tell us how you really feel about the 50 Shades of Gray hype.

RDP: A travesty in both how it came into being (Twilight Fan Fiction) and what it teaches young women to expect in a partner. Lastly I’m disappointed that I didn’t write it myself: I am not above writing the most offensive drivel in the history of mankind in exchange for a seven figure check.

SK: Be honest…which are better: Boxers or Briefs?

RDP: Neither, both were flawed and we only realized that much when the boxer-brief appeared in the fossil record of men’s undergarments. Briefs tend to be more snug where the thighs meet the pelvis. Boxers are too much trouble, first trying to keep them from bunching up when you put your pants on, and secondly having to straighten them out throughout the day when you think no one is looking. The boxer-brief solves both issues with a sleek partial legging that hugs the upper thigh just enough to remain where they should when you’re putting on your pants, and not too tight at all around the thighs and pelvic region. They are the paragon of men’s hosiers.

RDP: Christopher Hitchens; I’ve never seen writing quite like his. He was a master of the English language.

RDP: That’s a tie for The House of Mirth by Edith Wharton and Brideshead Revisited Evelyn Waugh.

RDP: I love film, so that’s a difficult one to pinpoint. A few that are in the running are Before Night Falls, Loves of a Blonde, We Need To Talk About Kevin, Pretty Baby, Love and Death on Long Island, In Dreams, Dancer In The Dark, Gypsy 83, Silent Hill, and Melancholia.

SK: Literary Hot Button: What are your thoughts on Writer’s Block? Does it exist? How do you overcome it?

RDP: It certainly exists for me. In most cases I stop writing that story for a while and move onto something else. Then I’ll return to the previous novel when inspiration strikes again. This was the case with Ebon Heart, where I’d written the first few chapters, got stuck, and moved on to write The Untold Want. Then, much later, I returned to Ebon Heart and finished it. The cover art was also a bit of a spark of inspiration as well, once I had that.

SK: If you were told you could never write again, what would you do to fill your time?

RDP: Be the first storyteller to deal exclusively in audio books.

SK: Of your backlist/coming soon agenda, what’s your favorite story? Why?

RDP: Of novels to come, my favorite is an untitled project I’m working on alongside the third Odin Blood book. It’s a horror story about a place a few miles from my hometown called Eden, UT, which is built around a huge lake with an island at its center, and an interesting history (there is a town beneath the lake, flooded in the 1930’s). My cousin lived there and I spent my summer there growing up. It’s currently my favorite since there are characters that I can relate to more than the paranormal romance hero/heroine type of characters. These are individuals who face dark issues and aren’t expected to do the right thing by the end of the novel because they aren’t heroes.

About The Odin Blood Series

The valiant King Ulfur defeated the evil that swept the seaside village of Nornör into despair; Morgan, the demon witch, has been dead for nearly twenty years. The truce between King Úlfur and the Queen of the Fae has remained intact since the day that Morgan’s dark curses vanished. It seemed that peace had finally come to the wounded souls of the village.

But this peace is shaken when three curses that Morgan promised with her dying breath are placed upon the Norwegian village: who among them has cast the spell?

Seventeen-year-old Erica finds herself trapped in the middle of a witch’s deadly revenge scheme with no way out but to fight for survival. On top of trying to end the curses devouring her village like a savage beast she finds herself at the center of attention when it comes to Viking King Úlfur’s three sons: Kriger, Paul, and Finn.

Three of them will fight alongside her.
Two of them want to marry her.
One of them could be the son of King Úlfur… and Morgan. 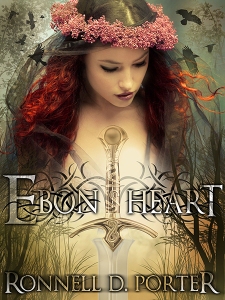 “You know not of King Bersek, Lord of Berserkers… The Berserkers are men of darkness; heartless and unyielding. They know no fear, they know no pain – and the sound of them ripping and slashing and tearing people apart by their limbs: chaos incarnate.”

One year after triumphing over the events surrounding the cursed Blackthorn Dagger, Queen ‘Dagger Heart’ Erica receives an ominous warning from a group of survivors that arrives in her village of Nornör: an army like no other, steeped in dark necromancy, heads for her Norwegian shores. With the winter solstice quickly approaching and no sign of the black wolf that used to roam the woods of her lands, she races against time to uncover the mystery of The Necromancer, as well as the absence of her dear friend and love, Finn.