Good morning and welcome to another edition of Blogging with Siobhan.  Or rather, Blogging FOR Siobhan.  Today’s guest is the talented Anne Holly, who many of you may remember as the author of Like Magic, which I reviewed sometime back.  As always, it’s lovely to play with her, and I hope you enjoy what she has to say.

Snow is a much maligned thing. Cold and wet, I suppose it doesn’t make much of an effort to please, but by the same token it’s lovely and awe inspiring. This little crystalline thing materializes out of the sky and covers the earth, along with millions of its brethren who are both like and totally unlike it. Like humans, snow flakes are both unique and connected. Inconvenient, perhaps, and occasionally dangerous, true, but I suspect the planet feels the same way about us human beasts.

I grew up on an isolated little farm, where the wind whistled and howled around the corners for about six months of every year. But that isn’t the only soundtrack of winter. If you live in a land of ice and snow, you will understand what I mean when I mention the muffling effect of snow. In the early morning after a heavy snow fall, when no one’s around, there is a silence that can’t be duplicated. This is the sound of snow. Calm, peaceful, serene silence.

Along with the crunch of boots in fresh snow where no one else has yet walked.

Snow is far from bland. It can fill untold numbers of afternoons with joyful play and the drama of ice. And there’s more to snow than cold. My father used to bank our house in snow, since it can also insulate. And there’s more to snow than white. There are many shades of blue in undisturbed fields, and gold with silver as it falls like powder, and pink as the sun sets upon it. And in the north, the sky lights up and dances on it.

I love the snow. I know it well, having lived my life in some of the coldest nooks in a country somewhat defined by its winter. It’s no surprise that I find myself writing about it often, returning to the fascinating glassy or blank surface that covers everything beneath it. My love stories are often prefaced by it, my couples surrounded by it, sheltered by each other from the wind, and isolated in a sea of snow – and snug within the layers of white that close out intrusions. It’s when they dig themselves out, or the world digs itself in, that the magic falters.

In some ways, it might seem that I am building a career on holiday stories, but really I’m building a career on snow. And rain, and wind, and all of those things that people often take for granted when compared to the showy glitz of lazy, sunny summer days. I’ve heard it said that the earth shows off in spring, summer and fall by parading its pretty colours and dramatic plumage. But, it shows off in winter, as well, if you stop to watch it. Only, in winter, it reserves its most serious art for the season that reminds us of the balance between life and death, and cold and warmth, and love and alienation.

This is the season I like best, because those things are what I write. 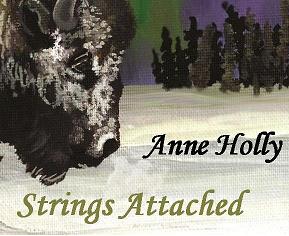 Anne Holly is a Canadian writer of romance and erotic-romance, as well as a mother and teacher. She is the author of the novel Strings Attached, which was described by The Romance Reviews as “a classic contemporary romance.” She has been published by Wild Horse Press, Decadent Publishing and Rebel Ink Press, and in 2012 by Pink Petal Books. Anne’s work is characterized by its unusual heroes, sweet/spicy balance, witty dialogue, responsible citizenship, and its positive, optimistic nature. She has found a particular niche in holiday romance. You may visit Anne at her blog or website, or find her on GoodReads, Facebook and Twitter  (@anneholly2010). Sign up for her newsletter here. Email her at anneholly2010@gmail.com.

Thanks for stopping by, Anne!  Come back soon!