Welcome to Day 14 of The Highlander Mine blog tour! Kharisma made me promise I’d play nice, so I promise I’ll behave (for now).  She, however, made no such promise. She’s as smexy as always… I’m just happy we get to witness it firsthand over here.

I recently had the chance to interview her, so let’s see what sort of naughtiness she concocted.

SK: What made you want to write?

KR: I never sat down and consciously said “Hey, I’m going to be an author.” It really just happened. I wrote and wrote and when I’d show people they’d say I should publish it. For two years I heard it and did nothing. Then I just did it, I submitted figuring to get rejected (you know, friends would tell you you’re work was great even if it wasn’t). Every location I subbed to, my work was accepted. So, confidence helped until you see that there are millions of authors trying to get that book sale. I’ll never pay my mortgage on it, but I enjoy it. I write what I like, not to current sales drifts. Now, it’s kind of a love/hate relationship I have with it.

SK: What is a typical day in your life like?

KR: Chasing my tail. Days start about 4am, I drive my oldest to school about 6am. The others around 7:30. Then it’s feeding the goats and the dogs, starting laundry and dinner and picking up at least a little. Then it’s NBP stuff and trying to fit in my own writing. Depending on the day, sometimes there’s early release or a game that my kids are involved in. So, I start pickups and/or attending games as early as 1pm. Generally we’re all back home for the night by 5:30 and that’s when dinner and homework and all that stuff comes in. People think I have all this time to myself with kids in school, but it’s really not true. Some of those school days I’m volunteering at the school as well.

SK: What’s worse for you: a bad amazon review or a bad review from a fellow author?

SK: Of your backlist/coming soon agenda, what’s your favorite story? Why?

KR: Well, it’s kind of a toss-up. I have some coming out this year that I’ve really been anticipating their release. One is Highlander Mine. It’s my Highlander Historical Time Travel Erotic Romance (say that fast 5 times). I’ve thought I was born in the wrong century and the wrong country. So does Auralee. I can’t wait to tell the story of her and Breandan. The second is Heart of Vengeance. It’s the first in my Viking series that I’ve been dying to get out there. The third I’m really excited about (and trust me, there is more) is Pieces of You. I’ve been DYING (pun?) to introduce her and Linc to everyone.

SK: How many genres do you write in?  Which is your favorite?

SK: Your inspiration – is it from your imagination or from personal experience?

KR: It’s all my imagination. Sometimes it’s something that’s twisted and I have to sit back and be afraid of myself for a while for thinking it up. Other times it’s how I wish life was, and sometimes it’s just…unexplainable ideas lol. Very little is based on real experience. I try to keep my life very separate from my writing. Although, a lot of it does include my love of history.

SK: If given the opportunity to meet one of your characters in real life, which would it be and why?

KR: I’d love to meet all the men in my books. I create them the way I’d love for them to be. They’re never based on images or internet pictures. 100% made up in my mind as I see that specific character. They’re all strong, almost to a fault. *sighs dreamily*

SK: Plotter of Pantser? Is there an advantage to either?

KR: Pantser. I honestly feel that’s the advantage. I change my mind a lot. My characters change their minds a lot. This way, I never have to go back and redo an outline or anything. I can just go with it.

SK: How do you go about researching your stories?

KR: It really depends. Sometimes I use good old reference books, sometimes documentaries and try to pick apart what’s really true. Other times I travel to see the places I’m writing about. Sometimes I have connections that know a lot about the history of an area or time period I’m writing. Once in a while I’ll get lucky and their family will have private historical records to share. I love the history almost more than writing the book. It’s allowed me to make better friendships and meet even more people.

SK: What comes first, the plot, the characters, or the setting?

KR: It really depends on the book I’m writing. Sometimes I work them out based on a setting in my mind that won’t go away and I know I just have to write something that happened there. Sometimes it’s a character nagging at my brain, demanding their story is told. Usually the plot and character ideas are almost one in the same for me.

SK: Who is in control when you write, you or your characters?

KR: My characters. Definitely. Sometimes I like to pretend I’m in charge at the beginning, but….

SK: What inspires you to write? My kids.

KR: In their eyes I’m already Stephen King. I write, so that maybe I’ll get invited to the same stuff he’s at lol.

SK: When you write, is it with or without visual/audio stimulation (tv, music, etc.)?

KR: I NEED silence. I have to have silence. It’s why I get nothing done when the kids aren’t in school.

SK: Think fast: give me the silliest plot line you can think up!

SK:: If you were told you could never write again, what would you do to fill your time?

KR: Same thing I do while saying I wish I had time to write…kids, animals, volunteering. The same things I do every day and just try to make writing fit in.

SK: Literary Hot Button: What are your thoughts on Writer’s Block? Does it exist? How do you overcome it?

KR: I believe it exists. I mean, maybe not as an actual block…but as something in our minds that keeps the story from coming to us. I have multiple WIPs always going and when I get stuck on one, I go to the next so that I’m making some kind of forward movement. Then, after a while, I go back to whatever ones I was stuck on. Sometimes, I just need that break of focus and to think about something else. When I come back, I can view it fresh.

SK: If you could live in any period throughout history, which would it be and why?

KR: Hmm, probably 1300 or 1400 Scotland. Ahh, the men were really men then. Lmao I just would love to see the Highlands (being Scots myself) as they were meant to be all those years ago.

SK: If the apocalypse happened tomorrow, how would you react?

KR: I own guns. I’m not skeeeeeeered.

SK: Be honest…which are better: Boxers or Briefs?

KR: Boxer briefs. Nice and form fitting but not tightie whities (gosh I hate those things) 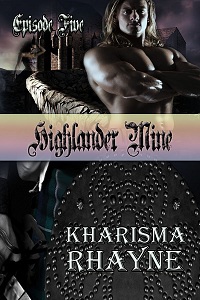 Season 1 – Episode 5
Find out what happens after the betrothal refusal. See a new side of Tor.

Auralee sat by the loch wrapped in her cloak. Niall and Argus had asked her to remain in the keep due to the chill in the air, but she needed to escape the confinement. There wasn’t much for her to do. She didn’t do any sort of needlework and they’d not allow her to cook or clean. Izzy had control over the keep, but had offered her to do the menus for the kitchen. Since she was clueless and knew it would take Izzy weeks to teach her, she declined.

It was apparent Izzy loved her position and Auralee wasn’t about to start making enemies by making people unhappy.

But Auralee was becoming unhappy. She’d asked Niall to beg Argus for a way to go back to her real home. Her real time. It seemed she held no real purpose in being here.

Every way Auralee turned, someone was saying something about her. It was almost as it was when she’d first arrived. Those that had started talking to her, no longer did. Well, a few did. They said they didn’t adhere to gossip, but most had ignored her without even so much as a goodbye said.

Then there was Breandan. She’d never been as stubborn as she was around him. It was like he pulled it from her and she could never simply be agreeable. She kept remembering the words he promised her if they married. He’d sacrifice his own life, and those of his men, to keep her safe. Chivalry like that didn’t exist in her old world.

Auralee knew she should have taken that and felt like one of the luckiest women in the world – and married him. But, he pulled it out of her again, she wanted more. Still she couldn’t believe, the way these old Scots were, and that she’d asked him to get on his knees. She didn’t think one of them would ever do something so submissive.

She would have killed if any of the men she’d known had said anything half as romantic to her. Hell, half? Shit, make that one-tenth as romantic.

Over the last year, Auralee had learned that the Highland Warrior was not a fantasy made up by creative authors. These men actually existed a long time ago. The time she was currently in. They protected their women, made sure their hands stayed soft, made sure they were fed, had clothing and were as safe as possible from other men.

Of course, like in the current time she’d left behind a year ago, it was also based on station. Some people ate better, fought better, and had softer hands.

Some things you couldn’t escape no matter the year or country you lived in.

Auralee looked over from the water she’d been staring at for what must have been hours. There sat Tor beside her. “Checking up on me?” She asked innocently.

“Ye know that any one of the three terrors would have me ballocks if any harm came to ye.” Tor smiled with amusement. He knew how it irritated her to be watched.

Auralee laughed, knowing he spoke of Niall, Argus and Breandan. Although which he feared most, she wasn’t certain. He fully believed that Argus had magic. Niall could banish or torture him. And there was no telling what Breandan would do to him. That thought made her visibly cringe. “Who are you going to try to hide from?”

“Hide?” Tor looked horrified. “I’ll no be hiding. I’ll lose me ballocks first. Hide.” Auralee watched him shake his head in disgust. “Would ye be having me wear a dress too?”

Auralee laughed, the sparkle in his eyes giving away his attempt to tease her.

Be sure to check HERE and visit all the blogs on this tour for neat details. Also, be sure to stop by Kharisma’s site (HERE) for a change to win the complete Season 1 of Highlander Mine.

Pick up episode 5 at ARe – Amazon – Barnes & Noble