Good morning, my lovelies! I have a treat for you today.

Courtesy of the lovely ladies at Mocha Memoirs Press, the lovely Shannon Wendtland has a fabulous steampunk adventure available for your kindles! I don’t know about you guys, but I can’t wait to get my hands on it! 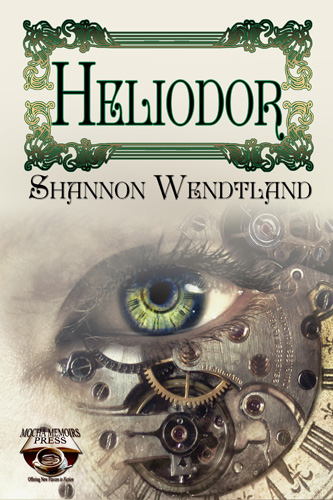 Malfric sees through the eyes of the dead – literally reliving their last moments as if they were his own. This ability is highly sought and highly priced, which is why the unscrupulous Captain Finch hires him to find the murderer of a nobleman and the whereabouts of a valuable artifact.

Quantex, the able-bodied first mate of Captain Finch, quickly becomes Malfric’s foil as he demonstrates uncommon intelligence during the investigation. Together the two uncover several clues that lead them to the killer, the artifact, and the frayed end of a mysterious plot that begins to unravel the moment Malfric takes it in hand and gives it a good yank.

How about a little taste?

Quantex threw the wheel hard to starboard and leaned in, digging his boot heels into the deck and gritting his teeth.

The pirate ship had come up from beneath them, at ramming speed it seemed, and veered to the side just in time to swipe their hull. The pirates had outfitted their ships with iron tridents that extended from their hull like great black rakes.

The Ariel had sustained some damage, rips in the hull and the like, and it might be a long time before it could safely land in the water and stay there.  Luckily, their ballast tanks were still full.

Still leaning on the wheel, Quantex grinned tightly as the ship swung around, the stern facing the broadside of their attacker.  Pirates swarmed on the other ship’s deck, raising their fists and voices in a rallying cry.

This was going to be a nasty fight, Quantex knew.  But he hadn’t always worked for Finch, had he?

“Arm the ballista and cinch it down at the stern.  Make sure the knots are good and tight ― let’s tie the bitch to us and take her for a ride.”

“That’ll take several minutes, sir,” offered Chulo, his hat in his hands.  “What’ll ye have me do with the rest of the crew?”

“Grapeshot in the cannons, aim for her mast and the sails.  And when I say, tell Jessop to release all the air in the big bladders.  We want to sink like a rock and take her down with us.”