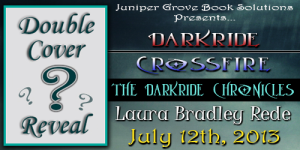 Good morning, my lovelies, and welcome to another day of guest post goodness.

With me today is the lovely Laura Bradley Rede to give us a peek at the brand new covers for her YA Paranormal Romance series, The Darkride Chronicles. 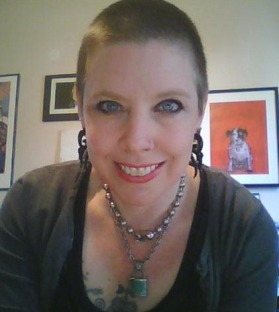 Laura Bradley Rede grew up as the oldest of nine kids in a small town on the coast of Maine. She now lives in Minneapolis, MN with her partner, their three kids, one great dane, and six city chickens. She is a Writers of the Future award winner and author of the YA paranormal romance series The Darkride Chronicles (DARKRIDE and CROSSFIRE) along with numerous YA short stories. Her new NA paranormal romance KISSING MIDNIGHT will be released fall 2013.

Now the moment you’ve been waiting for… THE BOOKS! Since it’s a series, let’s start at the beginning, shall we? 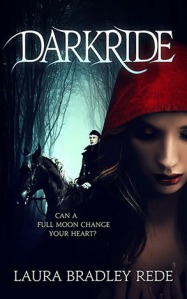 Ander McNair used to be the favorite son of a great monster-hunting family – until he was bitten by a werewolf and the hunter became the hunted. Now anything that makes his pulse race, even a kiss from his girlfriend Cicely, is enough to turn him into a monster. When he finally has his chance to earn his cure by killing a vampire prince, Ander finds he has to choose between his own past and the future of the girl he loves. Can a guy who’s not even human learn what it means to be a man?

Luke Marianez used to be an immortal vampire prince – until the witch he loved betrayed him and cursed him with the ability to die. Now he lives in the world of vampire blood bars where the waitresses are the drinks, and dreams about killing the last of the witch’s line so he can live forever. But revenge doesn’t just mean breaking the curse. He wants to break the girl’s heart, too. Can Luke seduce Cicely without falling in love himself?

Cicely Watson doesn’t believe in werewolves or vampires. She’s not even sure she believes in true love. But she’s about to discover what every werewolf knows:

Ander seems to feel better, too. He jogs a little ways ahead of me, then doubles back, high-fiving the trees as he comes. “So,” he says, “your birthday. What are you doing to celebrate?”

His eyes are full of sympathy. “Mom working, huh?”

“For the caterers tonight, then she has a wedding to do tomorrow, so I’m sure she’ll be busy. But she might make a cake.”

I’m suddenly glad for the shadowy darkness. It hides my blush. “Same thing I wished for last year.”

“And you haven’t gotten it yet?”

Right now all I wish for is to be able to see the expression on his face, but the shadows hide it. Does he know I wished for him? Is there some hidden promise in his words? There can’t be. I mean, if he felt the same, why wouldn’t he just tell me? If he felt the same, why didn’t he kiss me back there, when his arms were already around me? He can’t feel the same. I put a little extra stomp in my boots, trying to crush out any spark of hope before it has the chance to catch. This is how I get hurt.

We walk for a while in silence. What is he thinking, I wonder? His face is unreadable in the half-light. Trying to see him makes my eyes hurt, and trying to understand him makes my brain hurt. Being best friends with Ander is like doing long division in your head all day. It’s like trying to follow a foreign film without the subtitles. How can Zoe say he’s straightforward when I feel like everything he says is in secret code?

The woods have begun to thin. Up ahead, through the trees, I can just see Ander’s house, as dark and elongated as the shadows around us. It’s the only house around, shielded by trees on every side. Ander used to joke that I was the “girl next door,” because my mom’s trailer is the next closest place, and we’re on the other side of the woods. Only the long gravel drive connects Ander’s house to County 13 and the rest of the world. Its gray paint is peeling and the porch sags, but there are yellow marigolds in the window boxes and a welcome mat by the front door.

I wonder who that welcome is meant for. I’ve never been invited in.

Without saying a word about it, we both stop a respectful distance from the yard, like there’s an invisible line I can’t cross. “Well,” Ander says, “I guess I should go in.” He looks up at the sky, then glances at the house. There’s a light on in the kitchen window. His uncle is home.

“Yeah,” I say, “I guess you should.” But neither of us goes anywhere. Ander takes a little swig of Gatorade. I take a deep breath. I almost hate to ask him, because I know he’ll have to say no. His uncle never lets him go out.

But I promised myself I’d ask him. It’s a new year and I’m starting it right.

“Do you want to go out tonight?”

It’s hard to move on when someone you love dies–especially if that someone is you. But that’s exactly what Cicely Watson is trying to do: move on, away from the sunlit life she knew and into her life as a vampire. It’s the only way to protect her friends, and her only hope of getting close to the guy she loves. Now that Ander can control the wolf inside him, Cicely is determined they will finally be together–even if their natural instincts tell them to tear each other apart.

But when Ander meets a new girl with a power he can’t resist, Cicely fears she saved his life only to lose his love. And what about her own feelings for Luke Marianez, the handsome vampire prince? She always claimed dark, brooding Luke simply wasn’t her type, but can she still deny the fire between them now that she’s his kind? When the enemy captures someone she loves, Cicely is forced to choose. Can a heart that stopped beating start loving at last? Or will true love be caught in the crossfire?

There is an event wide international giveaway. Prizes include the following:

Thanks for sticking with us! For your dedication, how about another sample from Darkride?

The smell hits me: Bitter. Burning. Metallic as blood.

Before the thought can even register, I’m reacting. My muscles tense and the hairs on the back of my neck rise. The color seems to bleed out of the leaves around me as my eyes shift to the black and white vision of the wolf, my color vision dialing down while my other senses go hyper. The woods around me seem to shift like a dream going lucid as I become suddenly aware of every twig snap, every rustle. My mind divides: the part of me that is still human is fumbling for my bottle, tearing off the cap, chugging one dose, two doses, three—as if I could drown it, swallow down the animal that is rising up inside me.

The other half of my mind is thinking only one thing: vamp, vamp, vamp, vamp. I’m fighting instinct and I know I’m going to lose. The scent is strong, fresh. I am used to Michael’s scent; horrible though it was for me at first, I can ignore it now. But this? This isn’t Michael. This is a vampire I don’t know—at least one, maybe more.

And they’re on my territory.

I make a last, lame attempt at trying to breathe the way Michael showed me. I grasp for the stupid mantra he gave me, saying it over and over in my mind: Human is as human does, human is as human does…but it’s no use. The change is rising over me like water over a drowning man and fighting it only drives me deeper so I can’t breathe. A sudden shock of pain unzips my spine, bending me double. My hands hit the dirty forest floor. My mind latches on to a mantra of its own—please no please no please no—but it’s too late.

One thought on “Double Cover Reveal!!!”