It’s Day Two of the Backlist Bash, and joining us today is Lee Ann Sontheimer Murphy. Lee Ann brings us a lovely romance named In Love’s Own Time. 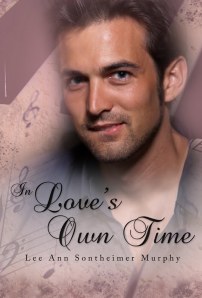 SHR: What makes this particular book your favorite?

LM: It has a little bit of all my favorite elements – it’s part contemporary, part time travel, a ghost story and a love story.

SHR: Who published it? When?

SHR: Tell us a little about what you went through to get it published.

LM: I started writing this novel and then shelved it about halfway through because I went to work as a substitute teacher.  When my schedule settled down, I went back into it and finished it.  The first finished draft was much longer and I decided the story bogged down so I cut a lot of stuff I realized was unnecessary.  I “almost” sold it twice – meaning I was invited to send the full MS after two partial requests from queries before Rebel Ink Press accepted it.

SHR: On writing in general: What’s the hardest part for you? Why?

LM: Promotion and the ongoing nature of promotion – I’d rather just settle down and write, edit, and write but I spend a lot of time doing promotion because it’s necessary.  I don’t mind doing promos – in fact I have a background working in media, both print and broadcast, but I resent the time it takes away from writing.

ABOUT IN LOVE’S OWN TIME:

There may be no place like home and nothing like love…..when history teacher Lillian Dorsey inherits a three story Edwardian brick mansion from the grandfather who banished her pregnant mother decades before, it’s a no brainer.  She’ll visit the place, see it and sell it.  Instead Lillian’s captivated by the beautiful home and intrigued by the ghost of the original owner, Howard Speakman.  Soon she’s flirting with the charming, witty gentleman who’s been dead for more than a century and before long, they admit it’s a mutual attraction.  Still, when she’s alive and he’s dead, any shot at being together seems impossible.

But where there’s a will, there’s a way… one afternoon while pretending to visit the past the impossible becomes a brief reality.  If they visited 1904 before, Lillian knows they can do it again and if so, she can prevent Howard’s untimely death.  With a combination of love, powerful hope, and stubborn will, Lillian bends time to her will and returns to the summer of 1904.  But Howard’s death looms ahead and if she’s to find a happy ending, she must save him from his original death.

“Lillian.” Howard sounded hoarse, his voice cracking with emotion although she wasn’t sure which one, fear, elation, or sorrow.  “This is 1904.”

“How could it be?” Even as she protested, she knew it was true.  The old house was new.  The smell of fresh paint mingled with the Dutch cake aroma and as she’d noticed earlier, the book covers were bright.  Howard’s sheet music pages never yellowed but sparkled unblemished white.  It was true and if it was 1904, then Howard was alive.  He wasn’t a ghost.

Lillian reached for him, stretched out her hand to touch him, and closed her fingers over his arm.  Through the wool of his sleeve, his skin was warm, so alive, and tears formed in her eyes.  Her right hand stroked the curve of his cheek and she clasped his hand with the other.   He twined his fingers through hers, tight as if he might never let go, and pulled her right hand to his lips, brushing her skin with a faint, soft kiss.

She could touch him now and she could smell him, a rich masculine aroma of soap and leather, and the outdoors.  Before, he’d been a ghost, not tangible, not touchable but for now, he was both and she reveled in him with every sense.  She touched his hair with trembling fingers and rubbed her cheek against his suit jacket.  When she lifted her face, his eyes blazed with emotion and she knew before he bent down they’d kiss.

In her dream, the kiss’d been sweet but in reality, it was sweeter.  His lips heated hers, melted, and moved against her mouth until she couldn’t breathe.  She put her arms around his neck and he held her, one hand flat against her back.   Until now, he’d been unattainable, almost fantasy, but now he was a man, a man who held her in his arms, and she wanted him.  Desire burned like a wavering candle flame but without warning, Howard released her.

“Lillian, I forgot myself.  You must forgive me.”

Her lips, bruised from his mouth, stretched into a smile. “I’ll never forgive you if you don’t kiss me again, Howard.”

“I shouldn’t.” His voice sounded muffled. “But I’ll, sweet Lillian, though I shouldn’t.  However, for the moment I’m alive. Carpe diem!”

WHERE TO GET IT: