It’s that time again…but this time it’s a little special.  Selah is a longtime friend of mine, and I love her to bits.  As you can see, she and I share a certain affinity for both horror and The Lost Boys. Please make her feel at home, and do check out Mooner, her first release.

I’ve said before at my blog that I love the horror genre because it gives an author a lot of wiggle room; you can write things that you could never get away with in other genres and people will not only agree with you and come along for the crazy ride, but they expect it. Still, the horror genre is made up of a vast and sundry amount of archetypes and some are more near and dear to me than others. Yet whether I’m watching a movie or reading a book that terrifies the hell out of me, I always seem to come back to one thing. Vampires, my friends, vampires.

It intrigues me that this perfect predator, this insane creature of the night has become the Mr. Potato Head of the horror genre lately. Don’t want to deal with the ages of folklore that created your personal Nosferatu? Eh, make him a modern vampire with a complex, people dig that! Don’t quite want to show your bloodsucker sucking blood? Eh, just make him hot and tragic — that works! Enough special effects and color-changing eyes will make up for lack of fangs or bloodshed. At the end of the day as long as he’s sexy, strong, vaguely different, and having a life crisis about what he is, that’s what makes a vampire, right?

Please. I love a lot of modern vampire stories, but let’s be frank. You can’t take the teeth and the bloodlust out of a vamp and still have it be a vampire. At its core, at its genesis the vampire legend was meant to terrify. What’s worse than the thought of your soul not being your own, even after death? What’s scarier than your loved one coming after you, trying to drag you into damnation with them? It’s incredible that the vampire has become a metaphor for so many other things, and I enjoy seeing it used as such, but at the end of the day vampires kill. And I’m thoroughly convinced you can have your hot vampire candy and they can eat, too. And since illustrations work faster than me waxing poetic, I’m going to draw on the vamp movie that is most near and dear to my heart (and Siobhan’s, too) – ‘The Lost Boys.’

Whatever you think about the movie, this is a prime example of modern bad boy vampire meets old school nightcrawler. Don’t believe me? First off we have the Lost Boys, themselves, the core group you see partying and feeding for most of the movie: David, Paul, Dwayne, and Marko. Okay, yes, I would be completely lying if I didn’t admit that they are hot as sin in this movie – and that’s the point. If a vampire is going to be hot, it’s because he or she is a successful predator. What better mechanism to lure in prey than seduction? True, you don’t see that come into play with them, but Star sure uses it to her advantage in the middle of the film. Let’s not forget, originally she was supposed to eat Michael, not get friendly with him. But there is never any doubt that they could tear you apart and not feel bad about it.

Unlike a lot of vampires that came after them, these guys are having fun. They enjoy being vampires! After the scene where they take out the Surf Nazis, how can you doubt that not only do they have to feed, they want to! And yet, even though we mainly see them partying and killing, the mere fact that Laddie’s character exists hints that there might be something else there. We don’t need any huge subplots about mortality or morality; the little detail that they’ve taken in this little boy for whatever reason speaks silent volumes. I’ve always had mixed feelings about the movie killing them all the full vampires off. On the surface it works, but because of these subtle, human details I still can’t help feeling bad for them. They were just doing what they do, y’know, and surely they couldn’t have been all bad! Note that they didn’t need four movies to get a subtle point like that across

While I applaud Anne Rice for using pioneering the angsty vampire, you can’t tell me that every member of the species feels that way. Nosferatu, Dracula, and plenty of others didn’t have qualms about being what they were. It’s nice to see that put into play here. I also really love seeing a bunch of bad boys as vampires, because I think it’s an image that reads really, really well. There’s no doubt in your mind when you first see them that they’re bad news. But it’s also like seeing that group that walked the halls in high school. C’mon, we all know the one, that group that was way cooler than you’d ever be, but you would kill to have them acknowledge your presence.

Like a lot of their earlier kin, there are rules to their behavior and they have to be followed. What I love about this movie is all the folklore it draws upon, whether it’s the lack of invitation in the family dinner scene with Sam, Lucy, and Max, or how the vampires are ultimately dispatched. The script makes the rules work for it instead of trying to get around the rules.

Now for those who dig the vampire relationship movie genre, this movie also plays into that a little with Star and Michael. Star is obviously the one who drags Michael into the group and they both take issue with making the final transformation. The movie never quite gets into what their qualms are, but you still get it. We don’t need to be hit over the head with a huge “But I’m turning into a monstrosity, can I be redeemed?” monologue. The motivations here and really through the whole movie are very basic: the vampires want to feed and have fun, Michael’s attracted to Star and he’s torn between family and power, Sam is trying to protect his family and takes the Frog Brothers along for the ride because they just want to kill vampires. And if you really want to get into it, both Max and Lucy are just trying to preserve their own little families.

And you know what? It works. The beauty of this movie is that as a viewer you can fill in all kinds of subtext that may or may not have been intended originally. I first saw this movie long after it came out and it was like a thunderbolt. It opened up the world of possibility that a horror story could have. Horror didn’t just have to be about some chick getting hacked up or some bogeyman stalking some poor schmuck…it could be about real people and believable relationships being threatened by something otherworldly, yet plausible in that world. Because that’s what also makes that movie really work. Not once do you ever doubt that there are vampires. It takes the world it plunges its audience into seriously. As a writer I tend to plunge my characters into crazy situations, but I’ve never forgotten the lessons I learned watching The Lost Boys. My worlds may be very different, but I try to treat my audience with intelligence, make my worlds believable, and any changes I may make to my creatures had better work for my antagonists.

Selah Janel has been in love with stories ever since she was locked in a library as a child and obsessed with ideas since she realized that her Barbies might have evil twins and there could be a fairy world on the other side of the local state park. By day she designs and creates costumes for different companies and events and occasionally gets on a stage, herself. Everything she does feeds the idea machine and she often finds a story in the strangest of places. Her work will be in the  winter 2012 issue of The MacGuffin, issue three of The Realm Beyond, and the upcoming Wicked East Press anthology Bedtime Stories for Girls. Her next ebook The Other Man will be available in March from No Boundaries Press. Feel free to visit Selah’s blog and have a look around! 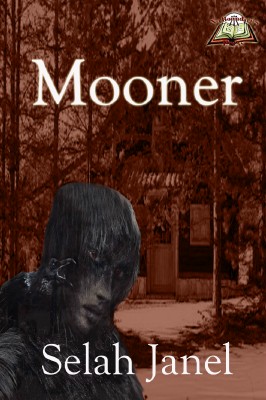 Like many young men at the end of the 1800s Bill has signed on to work in a logging camp to earn a fast paycheck to start his life. Unfortunately his role model is Big John, the camp’s golden boy known for blowing his pay as fast as he makes it. On a cold Saturday night they enter Red’s Saloon to forget the work that takes the sweat and the lives of so many. Red may have plans for their whiskey money, but something else lurks in the shadows, something that badly wants a drink that has nothing to do with alcohol. Can Bill make it back out the shabby door or does someone have their own plans for his future?

Be sure to check out the five-star review on Amazon while you’re there!

Thanks for playing with me, Selah!  Hope to see you soon.