Good morning, readers!  Back with me today for another taste of darkness is fellow Rebel Ink author, R.M. Kinore.  Please welcome her in and make her feel at home.

I have always had a fascination for the anything of the different Genre…you know…Vampires, werewolves, angels, and demons. All the things go bump in the night make me shiver and get excited. I remember the first time I saw Bram Stoker’s Dracula. Though I knew Dracula was evil and killed people I was rooting for him, secretly, when he first saw Mina Harker, the wife of Jonathan Harker, the young attorney he had enslaved in Castle Dracula. This caused him to reminisce due to her resemblance to the love of his life…his wife. The memory of his wife he showed us was before he became vampire. I felt his pain when the invaders attacked and murdered his wife, thus causing him to become Vlad, the Impaler. Due to the evil destruction he bore down on his enemies the gods cursed him with not only immortality but never to look upon the sun or feel love again. 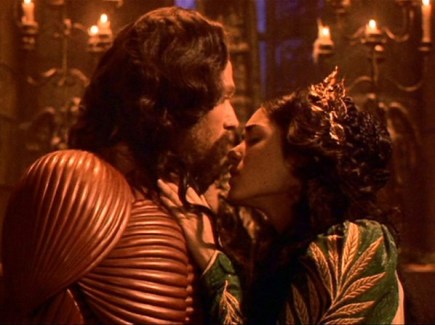 Immortal love appeared to be the theme in a many great works of fiction…whether it is horror, romance, historical, or other kinds. In Mary Shelly’s Frankenstein, the good doctor seemed into on recreating life but this came about because of seeing the loss of love. Indeed his obsession with caused him to lose sight of the true living, love and created a creature that had no body in his world…truly alone and isolated, never to feel the closeness of human companionship due to the hideousness of his countenance.

One of my favorite all-time shows, Buffy, the Vampire Slayer, dealt with the immortal love between Angel and Buffy. Angel, though significantly more handsome than the Frankenstein monster, shared a great deal with him. Angel lived in isolation from humanity in an attempt to pay retribution for all the evil he had done. He thought, when he first met Buffy, he needed only to put her on the path to stop the master…the father of all vampires. Once he had accomplished this he could not leave her, and the more time he spent with her the more he came to love her and her him. Though in love they were star-crossed lovers for sure…for poor Angel should he experience one moment of “True Happiness” he would turn once more into Angelis and bring destruction and pain upon Buffy and her friends.

Want to know more about R.M.?  Check her out here:

Pick up a copy of Once Upon a Twisted Tale to check out both R.M. and a load of other lovely RIP authors!

Thanks for stopping by, R.M.!  As always, it has been my pleasure to have you in my sandbox!