Good morning, my lovelies! It’s a cold, beautiful Monday morning here in The South, and despite the fact that my head feels like a weather balloon, I’m making the best of it. In fact, I’ve got some fun for you today. Ken Charles has stopped by to talk about his newest (re)release and the ups and downs of the publishing industry.

THE THIRD TIME’S A CHARM(ING)

THE MERCIES OF CINDERELLA IS OUT!

Once upon a time, an aspiring Author sent a naughty take on an old favorite tale to a brand new publisher. The publisher liked the tale and sent a contract back to the Author, who signed it when he stopped jumping up and down. The Author and his new editor traded several thoughts and made some changes until both believed the story would live happily ever after. Unfortunately, neither of them knew of– the curse. One week before the story was to premier as one of the new publisher’s maiden offerings, the publisher went belly up. All rights returned to the Author, but the Author was very sad.

The tale went back into the WIP folder. The Author didn’t know what to do with the poor cursed story. But suddenly, it came to him. There was no curse! After all, this was a Cinderella story. So the Author pulled the tale out of the WIP folder and sent it off one more time. Having learned his lesson, he sent it to a publisher with a track record. And that is how The Mercies of Cinderella found its new home with Blushing Books.

Fairy Tales are fun to work with because of their familiarity. It’s fun to take the known and give it a twist. I always thought the arrival of Prince Charming and the glass slipper was only Act One. In The Mercies of Cinderella, I decided to present the reader with Act Two. This really isn’t a spoiler, but this Cinderella is no Disney princess!

KC Copyright 2013.  Moral rights to be identified as the author of the foregoing article asserted worldwide (including in Great Britain in accordance with Sections 77 and 78 of the Copyright, Designs and Patent Act of 1988). 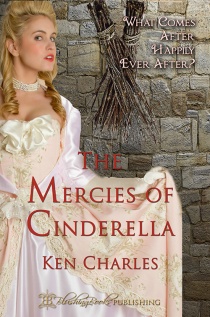 Payback is a bitch, and so at times is Cinderella. Cinderella is about to marry Prince Charming. Her evil Step Mother and Stepsisters have been convicted of high treason for their conspiracy to prevent the Prince from finding his true love, and are awaiting sentencing. Before the Prince passes sentence, Cinderella asks to take them into her custody for a year to determine whether she may speak on their behalves. The Prince grants her request, and remands the Step relations to one year under the tender mercies of Cinderella.

During this year, while Cinderella basks in the boundless love of the Prince and the joy of her first pregnancy, she applies the hard lessons she learned growing up to her Stepsisters, expressing her concern for their moral edification and well being with various paddles, straps, and even the scopula of a giant trap-door spider. Step Mother, who taught her that nothing in life is free, has to pay for her keep with sexual favors for all who provide her with any goods or services.

Where to Get it:
Blushing Books | Amazon | Barnes & Noble

I loved it! I love the author’s vocabulary. I have a fairly extensive vocabulary myself, and I get so tired of the same old words and descriptions being used and reused and overused. It’s really amazing when I actually have to look a word or two up in the dictionary! This author has a wonderful way with words. We read to be entertained. We read to escape for a time, and fantasize. This book delivers. I will definitely be looking for more by this author.